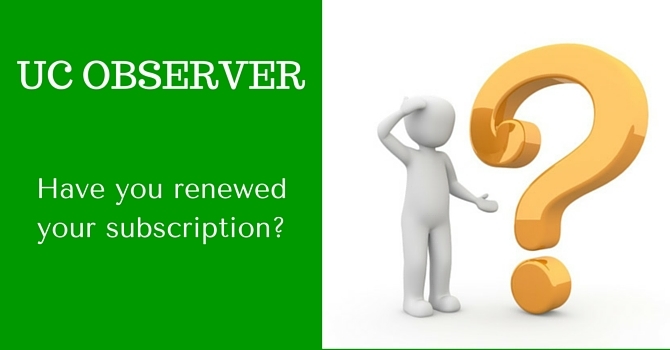 You have until June 25th to subscribe or renew your subscription. Look for the specially marked Observer envelopes  in the  entry way and the pews

For only $25 a year  receive 11 issues of a magazine that will have you reading from cover to cover. You can pay with cash or by cheque (made out to Crescent United Church) and dropped off at the office or placed the in the Little Church in the entry way.

Founded in 1829, The United Church Observer is the oldest continuously published magazine in North America and the second oldest in the English speaking world. It is known for its journalistic excellence and its articles link, strengthen and encourage United Church families across the country.  In 1986 The Observer became  independently incorporated. It now sets its own editorial policies and is overseen by its own board of directors. Only seven percent of its funding comes from the United Church’s General Council, with the rest coming from individual subscriptions, newsstand purchases, the Friends of the Observer Fund and government grants. The Observer’s financial and legal independence permits the publication to comment freely on matters within and outside The United Church of Canada.